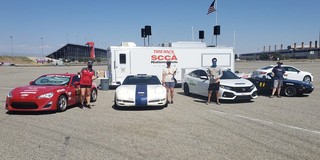 The final regular season event of the 2020 Tire Rack SCCA ProSolo season took place this past weekend in sunny Fontana, CA with 135 drivers qualifying themselves for the second tier of registration for the ProSolo Finale, scheduled for September 4-6. A select few took it a step further and qualified for tier one by winning their class and/or the Ladies or Super Challenge.

Thanks to the unique format of ProSolo competition, drivers don’t have to be their best on Saturday morning, which is lucky for Michael Oest who was under the weather and opted to miss his Saturday morning runs. Luckily, he was in fighting form by the afternoon and could sight the course. Sunday morning, he showed up ready to battle, finally making a deal with the tree to get a couple good lights on the right course. His hard charge was enough to win the class by 0.344 second over Matt Jones who had led through all of Saturday’s competition.

All three Ladies classes brought intense battles. In L1, Nicole Wong held off the charging Lisa Berry by just 0.179 second to take the class win. L2 had Neelu Yeoh and Shauna Rios tangoing for the lead with Yeoh taking the final win by 0.304 second. Finally, L3 had Catherine Tran sitting on her best runs from Saturday morning, but holding on to take the win against a charging Kate Fisher who went on to win the Ladies Challenge instead, knocking off Rios in the final round. Christine Grice matched her third-place drive in L1 by winning the third-place runoff in the Ladies Challenge.

The Kiesel family came oh so close to sweeping the trophies in R1, but Eric Clements broke up the party with a third-place finish in his Honda Van Diemen. Father Jeff Kiesel won the class in the EM Turbo Sprite, son Zak was second in his FM Raptor and daughter Kaila finished just outside the trophies in fourth, in the Turbo Sprite.

After finishing just outside the trophies in CAM, Kerry Gonzales got an opportunity for redemption in the CAM Challenge with her co-driver David Rock opting to run the Super Challenge instead. In the final pairing, Kerry faced off against Chad Ryker, the CAM winner in class competition. Gonzales took the win. Later, Rock advanced out of the first round of the Super Challenge to face G Street winner, Michael Yanase, who won that round, and continued to win, taking him to his first Super Challenge win. The celebration was emotional with many congratulations, but also many “thank yous” from Yanase who showed appreciation for those who helped him reach the achievement.

Craig Naylor may have been the second-fastest STS driver in Fontana, but without enough competitors to make a class, ran in the Bump Class with competitors from AS, ES, XP and CP. The results there weren’t as favorable, but Naylor made the best of it, putting his name in the hat for the Bonus Challenge and winning himself a free entry for a future SCCA National Solo event by winning the Challenge against Danny Gross from S1.